Khan Sha'ar Hagai and the Convyos to Jerusalem

The physical-geographical setting; The road to The City; The old Khan- camels, horses and coffee; An Israeli national monument; The display

Following the United Nations historical decision of November 1947 to partition the land between the Arabs and the Jews, the War of Independence and the battle for the road to Jerusalem commenced. Khan Sha’ar Hagai Heritage and Memorial Center commemorates the heroic story of those who broke through the bloackeded road to save the besieged city.

For a detailed description of the battle over the road to Jerusalem, the siege, the blockade, and the heroic convoys which ultimately succeeded, at a very high cost, to save the city, please refer to my previous post:

Bab el Wad and the Siege of Jerusalem

Khan Shaar Hagai Memorial and Heritage site is located within the general premise of Rabin’s Park.  Rabin, later Israel’s chief of staff, minister of Defense and Prime Minister, commanded the Har’el brigade in the battle for Jerusalem. The main exhibit, including the audiovisual interactive showcase is housed inside the reconstructed old building of the khan.

Shaa’ar Hagai, or Bab el Wad, “the Gate to the Valley” is a stretch of a road running through Wadi Ali (Wadi Nachshon), which was, and still is, the main road leading from the Jaffa (Yafo) port to Jerusalem.  The Mediterranean coast, where most of the Jewish population resides now, was very sparsely populated during Ottoman times.

The “gate” is located at about 290m above sea level at a steep and narrow part of the wadi, while the mountains around it rise to about 700m.

Sha'ar Hagai - The Road to the City

Traveling the “gate” – from donkeys to “diligences”

This  topography created a hazardous situation for travelers, who for hundreds of years were at the mercy of mountain bandits who controlled it. Its name became synonymous with danger and robberies.

Originally, a road from Yafo via Ramla to Jerusalem was created in the 8th century by the Omayas. The road was traversed by foot, donkeys and camels. 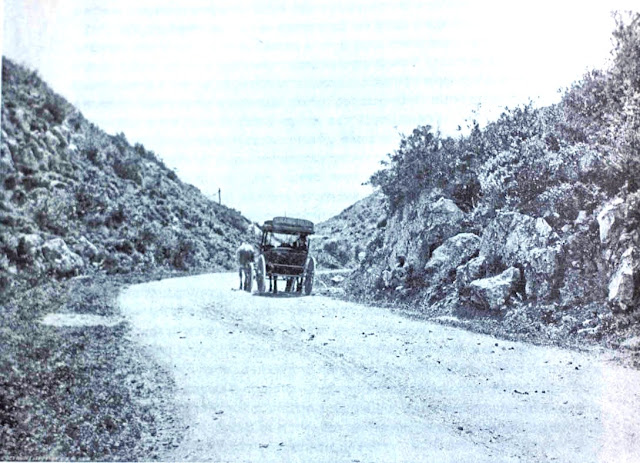 In the 19th century, however, traffic increased dramatically and the Turks started to improve the road. The passage was eventually paved in the 1860s in anticipation of the Austro-Hungarian Emperor Franz Joseph on his trip back from the inauguration of the Suez Canal. Paving made the road suitable for “diligence” travel. Diligences were French-style two-horse carriages, which subsequently became a common transportation form in The Land.

A personal story: My great grandpa was invited from Lithuania to serve as the chief rabbi of the “Old Settlement” in Jerusalem. I was told he was greeted at the Jaffa port by a crowd of Jerusalemites who braved the road on “diligences“ (French-style carriages) to meet him.

For further protection, Suraya Pasha, then Turkish governor of Jerusalem, built a series of guard towers along the road. Tower 13, known as Khirbet Kharsis, stands to this day across the road near the Sha’ar HaGai gas station.

Even by carriage, the arduous trip took up to two days, Naturally, a need arose to establish a rest place to refresh people and horses. In 1869, a roadside inn (khan) was built opposite the guard tower on the initiative of the governor of Jerusalem at the time, Nazif Pasha.

By the end of the seventies, the khan was leased to a Jewish family, who provided the horse services for the various consulates and even operated a private carriage service. By 1893, Solomon died and the family returned to Jerusalem. According to Luntz, at that time the trip by carriage took 9 hours and the carriages would stop at Khan Sha’ar Hagai for an hour and a half to refresh.

“(The khan) …is :an old house, from its belly button and below it is a stable and from the belly button and above a coffee house. A large stove is lit with several large kettles boiling on top of it. ”

Travelers were not charged for their stay, but were forced to pay an exaggerated sum for the coffee to finance the place….

The lettering, seen from Road 1 says: “Forever Remember Our Names. Caravans Broke the Road to The City”

The khan operated as a station for switching horses, collecting taxes and a place to stop and rest for some 50 years.

In 1892, the train between Jerusalem and Jaffa began to operate and the khan’s business declined. A farmhouse, the Kutneh building, was built on site by an Arab family of that name right after the opening of the train line.

During World War I, the khan was neglected. After the war it opened again for a short time and then was closed for good during the riots of 1921.

The British and more riots

In the early 1930s, a British Army mess hall was built next to the khan to serve British soldiers on their way to and from Jerusalem. During the Arab revolt of  1936–39, the Arabs placed road blocks on the narrow road to impede Jewish traffic to Jerusalem. The British, on their part, established a police station at the khan, manned by Jewish police, to protect the  passage.

This was the prelude to the siege of 1948, which took place immediately once the British mandate had ended.

“It is very important to us that this story be told to the next generations.”

Politics, traffic and other difficulties

Plans for the establishment of a museum at Khan Sha’ar HaGai in memory of those who broke through the road to Jerusalem, began to take shape in the 1950s, to mark the 10-year anniversary of the state. The proposal was shelved due to technical difficulties. Six decades later, in 2017, a highway interchange was built that solved the main problem of access to the khan from the road.

Following Prime Minister Yitzhak Rabin’s murder and the naming of the park after him, plans were again in the works to renovate Khan Sha’ar Hagai and turn it into a museum. The idea was to commemorate both the battle legacy of the Palmach Har’el Brigade he commanded, and the heroism of the convoys to Jerusalem.

However, 15 years later, the right-wing government overturned that decision, and proposed to build the center in memory of the minister Rehav’am Ze’evi, who was murdered in a terrorist act.

The Dor Hapalmach Association , representing Palmach combatants and their families, opposed that decision vehemently; 80-90 years-old went on demonstrations. The Palmachniks had gone as far as to unilaterally declare the site as their legacy.

In the end, then Prime Minister Binyamin Netanyahu, agreed to compromise and the site was dedicated as a memorial to the convoys which broke the road to besieged Jerusalem.

The Khan and the Kutneh House had undergone a thorough renovation. The British mess hall was dismantled and rebuilt. Trees and native shrubs were planted around the buildings.

There are two parts to the display at Khan Shaar Hagai Heritage Center.

The ingenious indoor exhibit, designed as an interactive audio-visual and hands-on experience, is located inside the renovated building of the old khan. During 40 minutes, the visitor is led from one space to another, and in each, experience different aspects of what it meant to live in those times and be on a convoy.

To make it attractive for families, student groups of all ages and individuals interested in getting the feeling of the times, the display challenges the visitor to make decisions for him/herself as if s/he were actually there and in charge. The visitor “protagonist” is asked highly consequential logistic and ethical questions such as: Shall I continue or turn back when the shelling gets heavy? Shall we bring food or ammunition when space is limited?

Additionally, you can find here a simulated experience of traveling on an actual armored van. The windows, blocked but for small gun holes, display the view outside or some pertinent images:

Outside you can stroll the grounds of Khan Sha’ar Hagai and see a sample exhibit of reconstructed old convoy vehicles, including an Egged bus, meticulously detailed all the way to the original numbers.

Bab el Wad and the Siege of Jerusalem.

It also belongs in the post series The Israeli Parks Project as well as to series “Israel’s healthy Foundations“, under the general category of “Israel’s best” on my website Planetsdaughter.com. all of which are dynamic.

Ben Gurion’s Genius – Dismantling Militias on “Both Sides”
Ben Gurion's political genius enabled him to dismantle the pre-state militias on both sides of the political spectrum, and merge them into the emerging IDF. It hasn't been easy, but the state would not have survived otherwise. I elaborate about the healthy foundations of Israel. Make comparisons to the American situation.
Bab el Wad and the Siege of Jerusalem
Bab el Wad, Sha'ar Hagai, is where the fiercest battles over Jerusalem were fought in 1948, as convoys tried to starving besieged city. Historical accounts and family stories are quoted.