A blind spot; The old law of gravity; Bhagsu Falls and the Waste Warriors; Holy rivers; A temple’s back yard; A girl must break up if boyfriend is polluter; 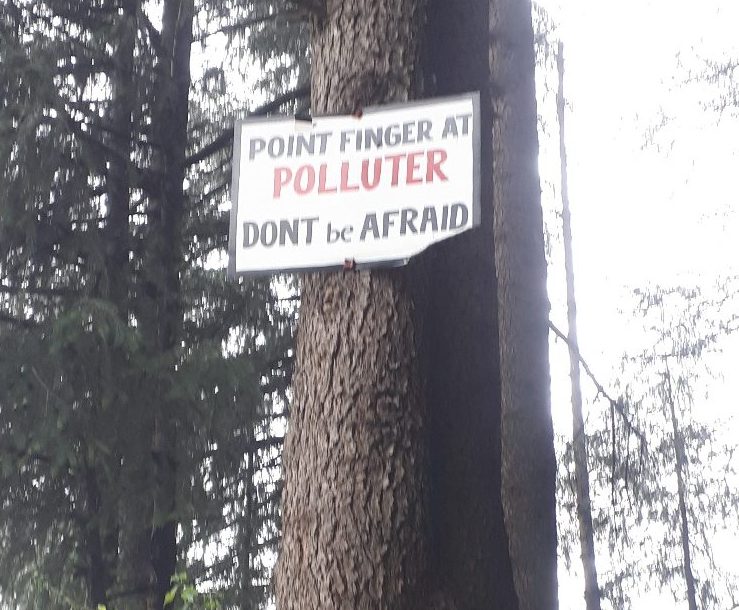 This sign and the sign at the bottom of this page were posted on trees on the beautiful walk to Vashisht Waterfalls near Manali, Himachal Pradesh.

Many of the pictures on this page are of poor quality due to weather and light conditions and the use of the cellphone camera. Apologies.

Hindus, Buddhists, Jains – they all had a gift for finding the most beautiful, majestic spots for building temples and monasteries. You imagine the ancient people being awed by Nature’s splendor, variety, immensity. You see them picking the locations most suitable for approaching the gods, for developing godliness. In your mind’s eye you envision the architects and masons doing Nature homage by building incredible structures in these locations – from the  humblest shrines to the most elaborate and artful.

The people today still have an excellent sense for esthetics. You need no more than to look at the gorgeous female attires, jewelry, decorations and colorful celebrations.

But they have a blind spot.

Since the invention of plastic and the onset of the globalized economy, old cultures in particular went into a spin. In the past, everything you threw away decomposed or was eaten by the animals. Especially in rainy terrains, decomposition was fast and justly taken for granted. Nowadays, the waste stays put. Worse, it gets washed down with the gushing monsoon waters.

In the old days, humanity as a whole thought the ocean was an infinite repository for terrestrial trash. The waste would just disappear somehow once it reached this grand seemingly infinite reservoir. There was no need to ponder any further. And, indeed, bacteria and other marine life took care of any organic matter that drifted into the ocean. They actually thrived on it.

Now, it all backfires. The middle of the Pacific Ocean  harbors huge amounts of non-decomposable and toxic materials endangering marine life, and indirectly, human and terrestrial life. A lot of the garbage comes from India.

Many in Israel have the same blind spot. We are not Switzerland by any measure. I was shocked, for instance, to see the garbage piles outside the central city of Ramla, or even behind some apartment blocks in my own Jerusalem neighborhood. Garbage collection on the municipal level is mostly well managed, yet a lot of work still needs to be done, especially outside the collection routes. We need more consciouness raising, better law enforcement, education, recycling programs, composting – to mention a few central issues.

India as a whole, though, seems to be on another scale.

That Old Law of Gravity - The Case of Bhagsu

My first encounter with the Indian garbage problem was in Bhagsu (Bhagsunag), Himachal Pradesh – a beautiful village in the lower Himalayas.

There are no garbage bins on Bhagsu’s uphill main street. Some stores might have a pail or a basket outside, but even those are rare. There are no bins at all up the steep mountain paths I was climbing every day to get to my dance class or my favorite coffee house. Under these objective circumstances, a person has to be super-aware to carry their garbage with them. Most people aren’t.

Furthermore, when you do find a trash can anywhere in India, chances are that a cow, a monkey or a roaming dog have already found it before you. More often than not, then, the contents will be spread all over the ground. Rare are animal-proof garbage bins as you might find in America’s National Parks, and even good bins do not necessarily withstand the harsh conditions. And, indeed, given Himalayan geography and climate, how can you maintain the needed infrastructure to collect the waste from these multiple mountain paths?

If a person does not understand the impact of their simple everyday actions, if there is no adequate garbage collection system, if animals mess up whatever there is – we are in for a colossal trouble.

And then come the monsoons. 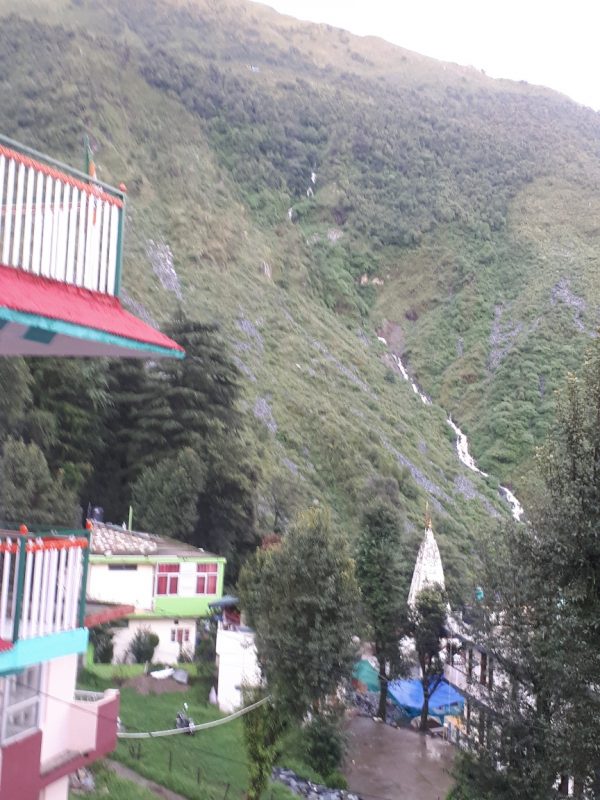 With the gushing water, all the wrappers, cups, packages, bottles, aluminium cans that were thrown by the sides of “Main Street Bhagsunag”, are now swept downhill, clogging the drains and canals, forming trash islands in the newly-formed street river.

Bhagsu Falls and the Waste Warriors

Bhagsu Falls is the most popular tourist and pilgrimage site around Bhagsu. And, indeed, it is a very beautiful walk.

Many people make a decent, if humble, living selling fast food to the visitors. Small, makeshift stalls are strewn all along the road from Bhagsu Temple to the Falls and even up the mountain. 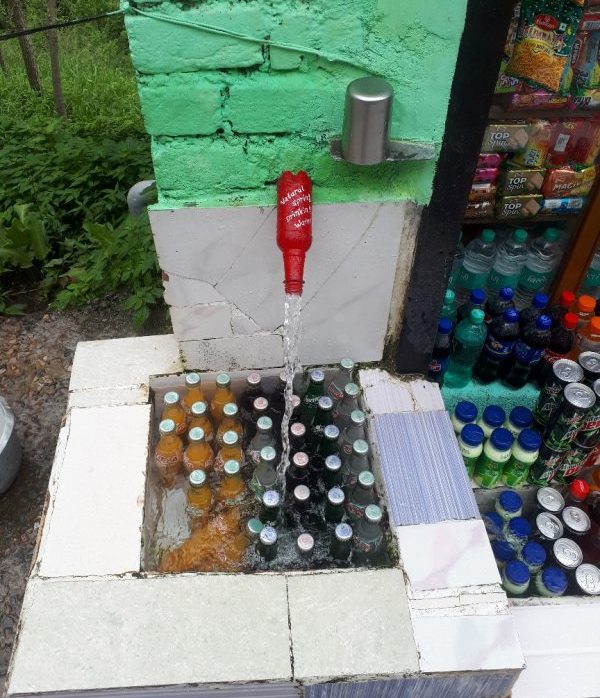 A non-profit organization called “Waste Warriors” placed bins every 50 meters or so on the way to the Falls. They even posted signs, like the one below, to direct people to them. Unfortunately, many bottles and cans do not end up in the installed garbage bins. People simply keep throwing their wrappers, bottles and other waste right on the ground in between them, as if carrying the empty packaging for 20 meters is too much of an effort.

Many Israelis participate in the Waste Warriors projects. Volunteers from Beit Bina in Dharamkot go to the Falls once a week to collect garbage. I did not join these walks, but did my own small contribution to the issue. Using the tip of my walking stick, I would lift up the wrappers from the ground and, hoisting them up on the stick like little coats of arms, I would walk to the next bin to dump them there. I tried to make sure people would notice the actions of the strange foreign lady… Some gave me a cheer!

Despite all the efforts, huge accumulations of garbage were concentrated around the Falls themselves. 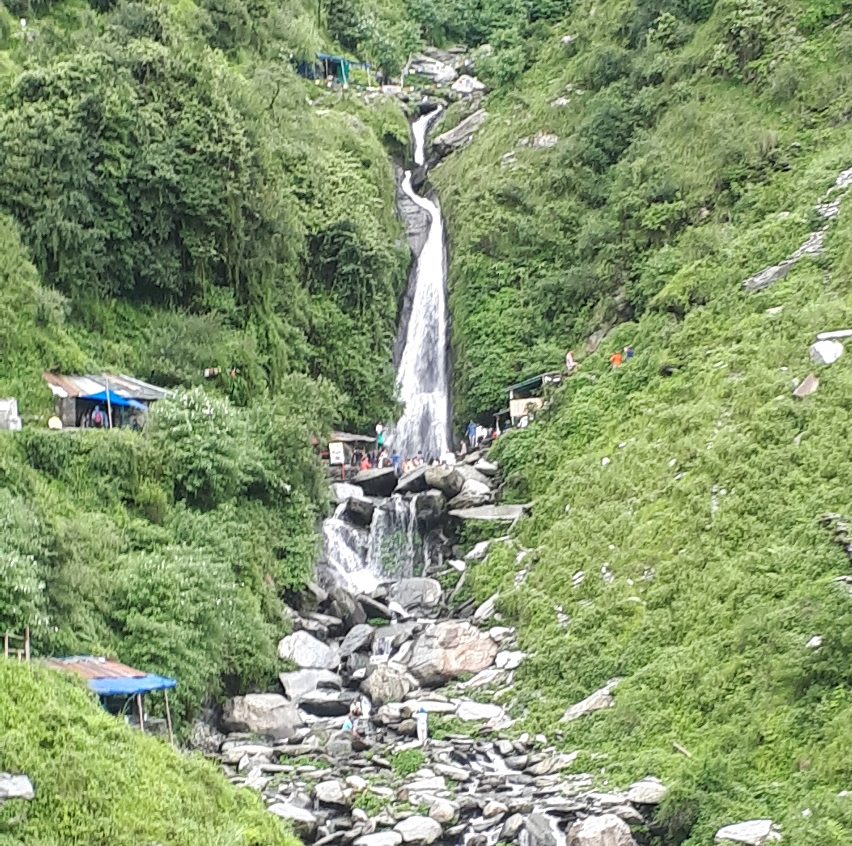 Lower Bhagsu Falls. Food stalls along the road are main sources of the garbage that ends up flowing down the stream.

The small makeshift stalls can be seen in the above picture. They supply the raw materials for the local garbage bonanza. 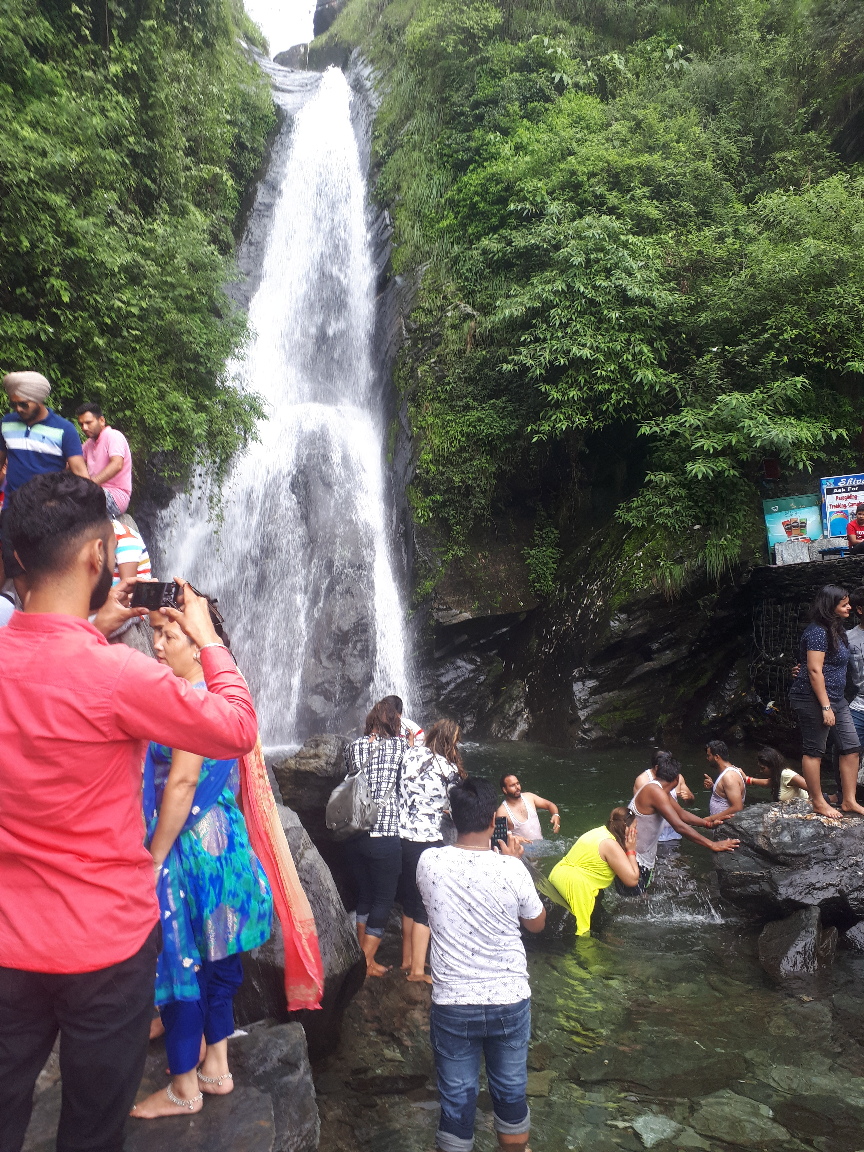 People enjoy themselves in Bhagsu Falls for a Shiva celebration

As the visitors enjoy themsleves, their candy wrappers, plastic chai cups and bottles find their way down the flow to the river. The rest of the saga is known.

According to myth, Shiva under the name of Gangadhara, received the river Ganga as she fell from the heaven. The Ganga is seen as a three-headed goddess above his head. The river was flowing for thousands of years through his hairlocks… This fascinating story with a beautiful picture of the Ganga in Shiva’s hair can be read here. 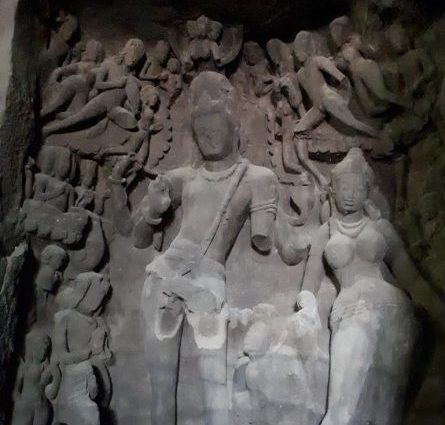 Rivers in India are sacred, holy. The Ganga, the Yamuna, the Indus are some of the famous ones. Songs are written for them, gods and goddesses are dedicated to them (most Indian rivers are seen as feminine), yet now they are full of garbage, trashed, defiled.

Udaipur City in Rajasthan is by far the cleanest and most European-like city I’ve seen in India. The river flowing through the city is beautiful, as well as the bridges above it, yet… the river, even here, had garbage drifting side by side with the pretty flower offerings.

A Temple's Back Yard

Savitri’s Temple in Pushkar is a highly-regarded pilgrimage site. The view from its top is extraordinary. 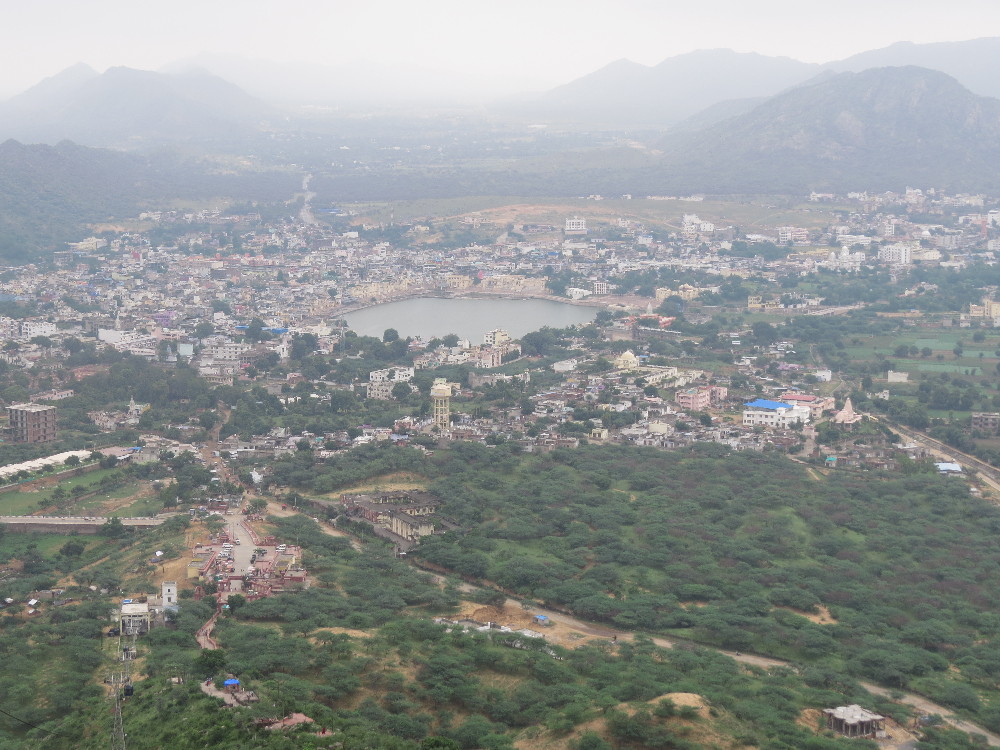 Yet people have to wait many hours for the temple to open. Right behind the building they munch their snacks or lunches and then dump the waste on the ground.

A donkey is taking advantage of the situation, but the plastic remains intact:

A Girl Must Break Up if Her Boyfriend is Polluter!!

From this one sign posted on a tree on the path to Vashisht Falls, I learned a lot about Indian culture:

There is so much more to be said about India’s garbage situation. The topic is as big and as vast as the garbage mountain itself. And there is more to it than meets the eye – social issues, governing issues, traditions, even religious issues. I am too small and ignorant to analyze all this. Moreover, except for one day in Mumbai, I haven’t yet been to any of the big cities, where I know the problem in some areas is acute. I will therefore limit myself to my personal observations and impressions in the upcoming sister post – Cleaning India.

Saving the Planet One Cow Dung at a Time, India – Part 2

Cows are holy, goddesses are revered, female pilots fly commercial, but are millions of rural women collecting cow dung doing sacred work, or dirty shitwork? Ecological, financial value of rural women's work is high, but they don't own anything. Academics give conflicting views on how the work is perceived in the community and by the women.

Saving the Planet One Cow Dung at a Time – Part 1

Cows are holy, but are women collecting cow dung doing sacred work, or dirtwork? First post on topic gives background on cows, "cow products" and recommends opening the mind. In Appendix you can witness a funny encounter regarding holy cows at the Israeli-Indian interphase.

India's garbage problem is vast. Animals clean but also trash. Environmental education is a drop in bucket. Infrastructure is lacking since most people don't pay tax. Cleaning is highly gendered.
This Post Has One Comment