Many come here; The restless Israeli; Some American stats; The india factor;

Many Love to Come Here…

The statistics quoted on a Yediot Aharonot article stated that for the first 9 months of 2018, 2.9 million tourists came to visit the Holy Land. These are very nice numbers, but not really surprising, considering the country’s potential and the universal obsession with this little piece of land.

Also helpful are the prospective new international airport near Eilat and the aggressive advertising by the Ministry of Tourism, especially in Eastern Europe. The ongoing turmoil in other Middle Eastern countries does not hurt either. Israel has a lot to offer to both religious seekers and sun-lovers…

The real earth shattering numbers, though, were in the opposite direction – 6.7 million Israelis flew out of the country in 9 months!!! Another 517,000 left by land,  and 50,000 more sailed by sea out of Haifa… Out of those who left by land, 60% went to the Sinai, despite all the security warnings!

In the year 2000, the equivalent number for flights was “only” 3.5 million. Even if these numbers are not totally exact, they for sure indicate a trend.

Since we are talking about a population of only 8.2 million, these stats mean that, extrapolating to the end of the year, on average, every Israeli – secular, religious, Jew, Arab, babies, elderlies – had left or would leave the country once this year…

The reality is, of course, that many people have never left the country, and some never will. There are those who would never leave for ideological reasons. By the same token, many people fly more than 3 times a year. Some visit family or children living or studying abroad. With low-cost flights, young people, savvy with online ticketing, go frequently to Europe for just a few days “to get some air”… Business people have always flown abroad with the same ease normal people board the bus to Tel Aviv.

Even taking all this into consideration, the numbers are still – simply phenomenal!

Corroborating these cold statistics was my very real sense that the country, or at least Jerusalem, were simply empty this Sukkot vacation. No cars on the streets, no beepings. Peace and tranquility upon The Land…

More on that in “The Israeli Phenomenon in India Part 1“.

Regarding statistics, it might be worthwhile in this context to mention the famous gun stats in America. Although, on average, every American – man, woman or child – owns about one gun, in reality most people do not own any guns, while some have sizable arsenals at home. According to the above Quartz  article, 3% of the American population owns half of the civilian guns in the country. Unfortunately, something similar is also true for how wealth is distributed just about everywhere, but that is a different topic.

Another American statistic: the New York Post quotes a poll suggesting that “a stunning number of Americans never leave home”. The poll shows that not only many people have never flown abroad, they have not even left their own state! A sizable percentage of those polled reported not owning a passport or even a suitcase… That sounds very strange to the Israeli ear.

In my North American blog, I elaborate on what I see as the benefits of traveling. Those include readiness to challenge our stereotypes, being open to the other, willingness to be surprsied, learning and developing tolerance.

As to my main topic here – the outbound bouncy Israelis – the fascinating thing for me is how many of us end up in India!!!

(Here’s a link to my in-progress blog on India).

That particular statistic on the Israeli escape will probably be very difficult to obtain. Although many go to India for just a few weeks, many others stay in the country for quite a long time, sometimes even years… When their visas expire, these folks do not go back to Israel, but fly to Sri Lanka, Nepal, Thailand. They come back with a fresh visa to the Promised Land – Mother India!

More observations, interpretations and wild speculations about the Israeli presence in India will be up and coming on this blog shortly. 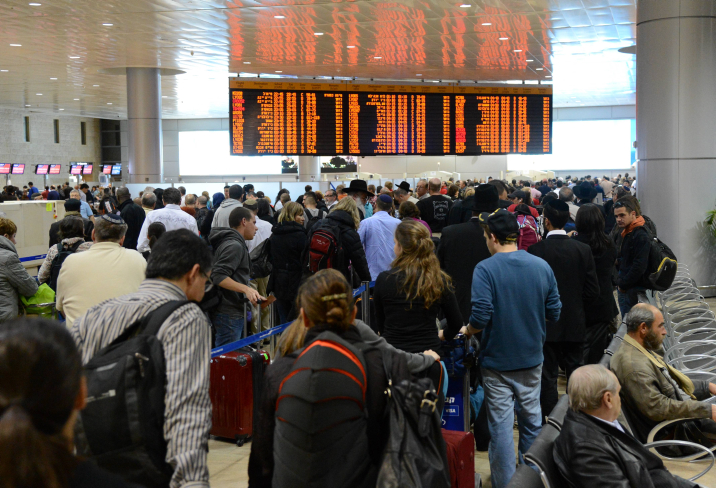 As I write, Israeli Foreign Ministry, El Al Lines and private citizens are making all efforts to bring about 100,000 Israelis home.

Here are some pictures:

Israelis on a special El Al evacuation flight on their way back from Lima Peru. March 20th, 2020

And about that said the wise person: All is well that ends well.

The Miserable Lot of the Israeli Car
The typical Israeli car lives a tough, precarious life from birth to death.
The Israeli Driver
The basic premise of the Israeli driver is simple: he needs to get somewhere and you are in his way. Everything else ensues from here.
“Kids are More Important than Buses”
What's more important - kids or buses? The Haredi community in Jerusalem lives in a time capsules, but jumping into a busy street can be dangerous. On Yom Kippur we all live in a car-free time capsule and that is pretty nice, actually.