Streams of the North

Easy does it. A mere 6.3 km from the wonderful and fun Snir Nature Reserve. AND – there was no line!

The guard was grumpy, though, and raised an issue about whether Ela can enter on my card, an issue not raised elsewhere. In the end, he gave in, handed me the brochure in two languages to my request, and we were off for a new adventure.

Of all the three northern sites we visited – the Iyon, the Snir and the Dan, this last one was the most impressive in terms of the strength and volume of the water flow. And, indeed, it contributes as much water to the Jordan as the other two combined.

Entering the reserve, the sound of water and the spray in the air could be felt from a distance.

Water and green bring happiness to the human soul.

Some of the trees in the reserve are fairly ancient.

Winnie the Pooh Was Here

Another paradisiacal area was the Winnie the Pooh Corner.

This is Pooh’s tree.

The bottom of Pooh’s tree

The map gave a false impressions of distances. Everything was much closer than we estimated.

It was a hot day, and I don’t like climbing hills in the heat. Still, I wanted to see the recommended viewpoint and the ancient pistachia tree, so decided to go for it after all.

It was less than a five minutes climb…

The view was magnificent, as was the old pistachia tree. I took pictures of the prickles just outside the fence to show what the summer native vegetation looks like outside the reserve.

Prickles outside Paradise. This is the typical summer landscape where water does not reach. Viewed outside the Tel Dan Reserve fence at the Pistachia Lookout

Not just a nature reserve. Tel Dan, as its name implies, is also a historical site, testimony to ongoing human life here in antiquity.

We did not go to ancient Dan, the archeological part of the Reserve, where Prof. Biran dug a settlement from the fifth millennium BCE, the early Cannanite period. Here are the highlights from the literature:

The Dan tribe’s onsluaght on a peaceful city

The town excavated by Prof. Biran and his team was surrounded by a glacis. It was identified as the ancient city of Laish, which was decimated by the invasion of the Israeli tribe of Dan, who renamed her Dan.

The Biblical narrator of Judges 18 does not justify this attack on peaceful, unprotected, unsuspecting people. He also blames the Danites for worshipping idols and for stealing an idol and tricking its owner. That idol they made into an object of worship in their city.

The story preceded the infamous story of “Concubine on the Hill”, which culminates with a deadly civil war between eleven Israeli tribes and the Binyamin tribe.

Seen together, the two stories demonstrate the lawlessness in the late Judges pre-kingdom period . Biblical criticism attributes them to supporters of the Davidic lineage. 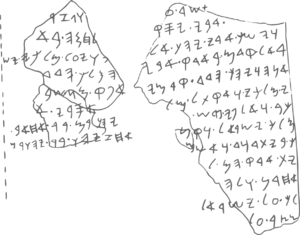 A stele found in Tel Dan is the only extra-Biblical source mentioning “the House of David”. The incomplete inscription ascribed to Hazael, King of Damascus, boasts his victory over the king of Israel and the king of the “House of David”.

From the Bible we learn that Hazael conquered the Land of Israel, but was unable to take Jerusalem. The inscription, dated to the 9th century BCE, describes how Jehoram, the son of Ahab, king of Israel, was killed. This corroborates the Biblical story of the killing of Jehoram, or Joram, the son of the Israelite king, Ahab, by Hazael.

The site was inhabited continuously until the Roman period, when the center of settlement was moved to the Banias area.

The only historical site we saw on our walk was the old flour mill.

The mill was built 150 years ago and was used until 1948. It has two pairs of millstones, which are now used as stepping stones on the trail:

This sign by the so-called Paradise (Gan Eden) commemorates the smuggling of Jewish “illegal” immigrants from Syria, Lebanon and Iraq into Israel during the retrictive British rule (The White Book) between 1943 and 1946

Our visit in the northern nature reserves ended with the most wonderful dining experience. Right by the Tel Dan Nature Reserve, there is a famous restaurant, Dag al Hadan, meaning, “Fish Over the Dan”.

The first thing we saw were the fish tanks. There was a sign explaining that trout was imported here from America, and it can only grow in Israel in the cold waters of the Dan.

This sign explains the method of growing trout in the Dan’s waters. Below I am donating my translation to the cause:

“Hello, I am the forel (trout) fish. I belong in the salmon family, which lives in fresh water. In Israel I can only grow in the cool waters of the Dan Stream, whose source is the melting of the Hermon snows and which have a controlled temperature of about 15°C. My body is elongated to enable me to move fast, and I am used to sprint and jump into the current in order to get over the obstacles and the waterfalls in my endless search for new food sources and fresh water. My life on the farm started as an egg imported from the United States, and I hatched in the cool and clear waters of the Dan. After I hatched I was called a larva… During this period I was nourished by my proteim sac. Several days later, the proteim was absorbed and developed into stomach and fins, and I became a baby fish. Now I could start swimming. As a baby fish, I ate most of the time and developed very quickly..! …After two months of swimming against the curent in the container, I became a full-bodied fish. By the time I weighed 10 grams I was tranferred into a larger and more spacious fish pond. My food changed as well and I was given a meaty diet, made mostly from fish flour, fish oil and vegetable materials. This food composition strived to imitate the food sources I would have if I lived in nature – a real treat!!! Now I am 10 months old. I am big and weigh about half a kilogram!

The fish arrive daily at the resturant table fresh straight from the Dan. It is recommended to eat the forel, as it is rich in omega 3 and low on cholesterol.”

Fish tanks with strong currents for the forel (trout) to swim against. Dag al Hadan

On the terrestrial side of things, walking around the farm is another kind of pleasure with colored chickens, roosters and peackos straddling around.

On the higher end of this food chain are we, humans

Needless to day the food was more than delicious! Here is Ela, enjoying every morsel:

Dining in the time of corona

To minimize physical contact by means of the menu, Dag Al Hadan directs you to their website by means of a code.

With our stomachs filled, we drove back to Haifa at the end of a rich and satisfying day.

This is an ongoing project currently under construction.